Tackling bullying in schools requires a team effort, including everyone from the Senior Leadership Team to Teaching Assistants.

Anti-Bullying Week 2019 takes place from the 11th to the 15th of November, and at Engage, we’re taking this opportunity to let our teachers and support staff know how they can refine their approach to tackling bullying at school. This includes knowing what steps to take if a pupil is being bullied, ensuring your pupils know what to do if they are being bullied, and how to deal with anyone who bullies. 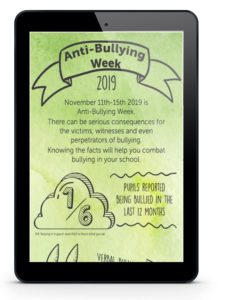 Any repeated behaviour which is intended to hurt someone either emotionally or physically can be defined as bullying. Though many times it is not clear why a child has been singled out as a target to bully, sometimes bullying is aimed at certain people because of their race, religion, gender, sexual orientation, appearance, or disability.

What are the effects of bullying?

Bullying can make pupils depressed and anxious, causing them to withdraw from the people around them, or act out in anger or aggression in other areas of their life. Bullying can even cause pupils to partake in self-harming behaviours, develop an eating disorder, exacerbate existing mental or physical health problems, or to have thoughts of – or even attempt – suicide.

With these effects of bullying in mind, it is extremely worrying that BullyingUK have found that 81% of young people have experienced name calling, and 50% have been bullied because of their appearance. 68% of young people have said that bullying has had a huge impact on their self esteem, and 70% feel that it has left them angry or aggressive.

What can I do to stop bullying?

What you can do to stop bullying depends on how you are made aware that someone is being bullied. You may either witness an instance of bullying, or be told that bullying (or a pattern of bullying) has taken place. There are also things that teachers and support staff can do to prevent future bullying taking place.

If you witness bullying

If you learn that bullying has taken place

Anti-Bullying Week 2019 at your school

The Anti-Bullying Alliance runs a School Staff Award, which encourages pupils to nominate teachers and school staff in England who have gone above and beyond to prevent and respond to bullying and to raise awareness of bullying in school.

The deadline for 2019 was 27th September 2019, but encouraging your school’s pupils to take part before next year’s awareness week will add extra accountability to the staff at your school to pay more attention to bullying throughout the year. (Maybe you’ll win next year!)

The Anti-Bullying Alliance also run ‘Odd Socks Day’, which is an opportunity to encourage pupils and teachers to express and celebrate their individuality by wearing odd socks. The charity suggests a £1 donation from participants, but state that “the most important thing is the message of Odd Socks Day’.

You can download the Odd Socks Day school pack here.

BullyingUK has launched their #ChooseKindness campaign for this year’s Anti-Bullying Week, asking schoolchildren to “choose kindness” by giving positive words to their fellow pupils.

Find out more about the Choose Kindness campaign here.

Don’t be a stranger

When you subscribe for updates from The Reading Corner, you’ll never miss a thing. We will send you relevant industry news, free resources to help you in your role, competitions, prizes, and more! You can unsubscribe at any time (although we can’t imagine why you’d want to!)

There is a lot of information and support available for teachers and...